My name is Tracey and I have worked for Newydd for nearly 7 years with the last 2 as Housing Officer.

I have recently signed up to be a Time for Change Champion; to talk about mental health and to try and remove the taboo around this subject.

I feel so strongly that talking is a vital part of managing mental health. I hope that my story will encourage others to talk to someone. From the help I received from Newydd, I want people to know its ok to be honest and it’s ok to not be ok. 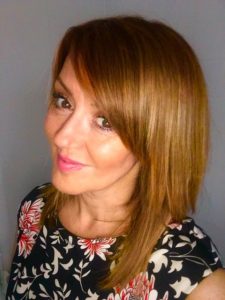 I know now that I have suffered with anxiety and depression since I was about 15 years old. Getting to the route of it has taken time, a lot of soul searching, thought, unpicking of my past, accepting some things that I have spent years ignoring and importantly allowing myself to accept help. I won’t bore you with all the details at this point, but suffice to say I had a challenging childhood with very little security and some difficult issues to cope with.

I think I must have been in my early 20’s when I first realised I felt different to other people. I was struggling, usually overcompensating by getting drunk and being the life and soul of every party to hide how miserable I actually was.

I was always putting on a tough front and smiling when I felt awful inside; lonely and isolated despite having so many friends I could not keep up with the phone calls and invites to things. I was reluctant to go anywhere or do anything and needed to drink more and more to feel able to cope socially.

Then in my mid 20’s, and even though I had a good job, I was becoming increasingly exhausted. I was trying to hide my low mood and feeling of constant dread. I finally got to a stage that I became too terrified to go into work, a job that I loved. At this point I had no alternative but to talk to my manger, and luckily for me, she was lovely. Despite my best efforts to try to cover up the reality of the situation, she took the time, without pressuring me, to get to the bottom of what was going on. She offered support and suggested I talk to a doctor. I did this and was diagnosed with anxiety and depression, which at that point I had never heard of. I was prescribed medication, which I was very sceptical about, but took anyway. I began to feel better and after about 6 months, my life felt real again. I started to feel genuine joy in my work and personal life.

I felt well and happy for many years with just minor blips in my mental health. I seemed to be able to manage with some minor adjustments and just by being a bit kinder to myself. However, my feelings returned around 3 years ago, when I suffered some gynaecological issues that caused me extreme pain. This resulted in me spending many days and nights in casualty and waiting to see doctors in clinics. I did not realise it at the time, but this was taking a toll on my mental health and about 2 years ago when my marriage broke down, I realised that I was once again at the grip of depression.

Putting on a brave face

Despite my previous experiences I again tried to put on a brave face and carried on functioning to a high standard in work. As you would expect after a while this became too much and I had no option but to take time off. It was at this point that I first realised how helpful it is to talk and to be honest about what is going on, as difficult as that is.

I rang Newydd and all I could manage to say through the tears was; “I can’t come into work for a little while”.

The reply was, “Are you ok? Are you in any danger? Has anyone hurt you? Do you want to talk about it?”

Having answered ‘No’ to those questions, a soft voice came back and said, “If you don’t feel up to talking about it today that’s ok, don’t worry, I am here for you when you are ready. Just look after yourself, get some rest and know that we are here when you need us.”

That was my Manager, Dina, and I will be forever grateful for her kindness. She contacted me a few days later by text telling me that she was thinking about me and asking if I need anything at all, she sent me flowers and an amazing card and it just said, ‘Here when you need me’. None of this made me feel immediately better however I did not feel alone or pressured about work or worried that I was going to lose my job. At the time I didn’t realise how helpful this was.

After a little while, when I felt able, I met up with Dina and we talked for hours. I told her everything that had been going on and she listened intently without interruption. After this I felt able to ask for help from my GP, and with some time, I returned to work feeling able to have bad days without hiding it and knowing that I had someone who understood.

Support from colleagues is key

Since then for one reason or another, I have had a further couple of bad patches and have always had the most amazing support from my colleagues and HR at Newydd. I trust them and know that they are there for me if I need to talk.

In my humble opinion the darkest of feelings and thoughts can be made a little lighter with having someone to talk to, someone to listen. Not everyone has family or friends that they are able to talk so I think it is vital to know there is someone there willing and happy to listen and be there for you if you need it.

Please be kind to yourself, give yourself a break, take as much stress out of your life as you can, try to find pleasure in small things, give yourself time, accept help when it is offered and if you are comfortable to do so (because you are not a burden, people like to help) and talk, talk, talk. In my experience you can feel so bad that you don’t see the point to anything, but with the right help (professional if needed) and a shoulder to cry on (and I have done lots of that), it will in all probability pass and a little way down the line your life could look so different, I know that it does for me.

I have suffered with poor mental health and I probably will again, but it does not define me and I will do my best to not allow it to control me. It is ok to not be ok sometimes but don’t suffer alone, let someone in.

Get the latest updates from Newydd